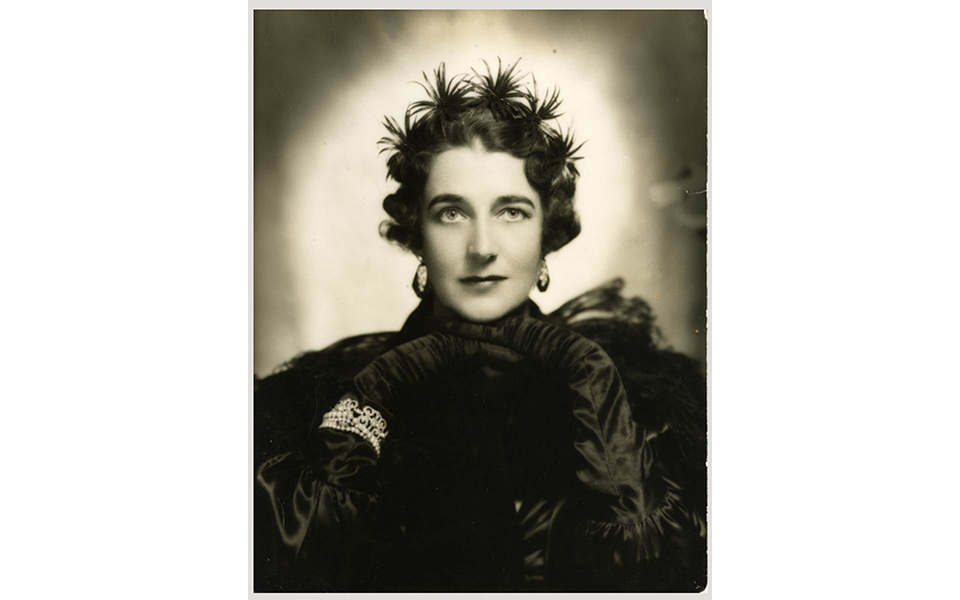 Dorothy Draper was born Dorothy Tuckerman in 1889. The Tuckermans were immmensely posh – the equivalent of English aristocrats. As did many of her English counterparts, Dorothy did not go to school for an education but instead travelled during her younger years. At the age of 23 she married Dr George Draper, Franklin D. Roosevelt’s personal physician.

As befitting people of their social status, Dorothy and George lived a socialite lifestyle. Dorothy soon became renowned for the way she created striking interiors for their homes. Her style was quickly emulated and she was inspired to start her own business. This was a highly unusual step for a woman in the 1920’s. She founded the Architectural Clearing House in 1925 which eventually became Dorothy Draper & Co which is today run by Carleton Varney.

Scale and drama, the person and the design

Dorothy seems to have been born with an innate confidence and was clearly a forceful character (as one needs to be as an interior designer). A statuesque WASP, Dorothy was 6 foot tall so she was as striking in person as her interiors. 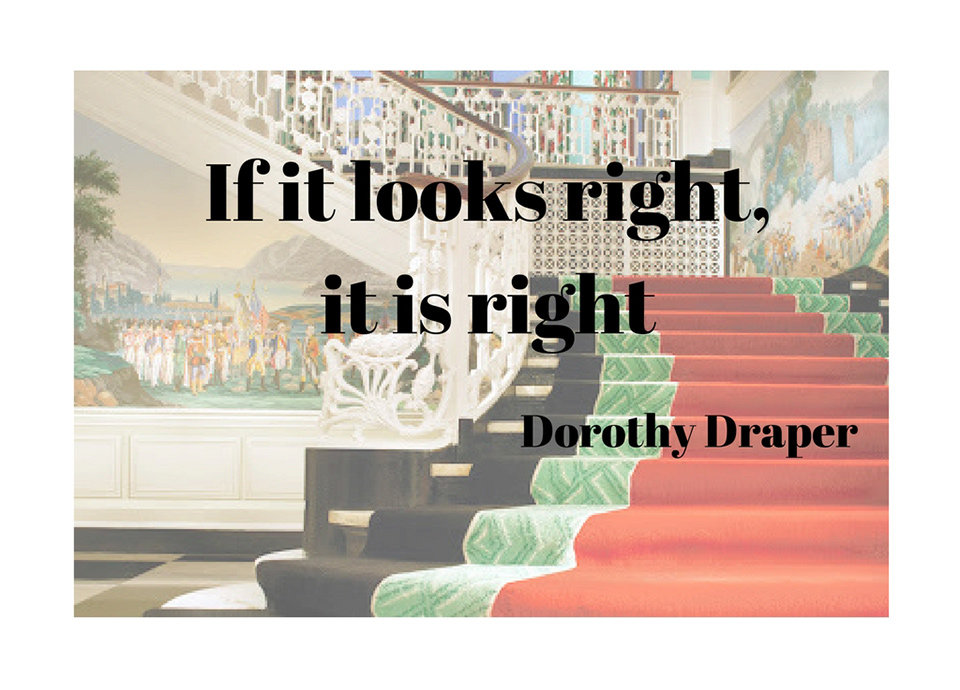 She had many famous mottos, one of which was “If it looks right, it is right”

Dorothy did not undertake domestic projects, disliking the need to comply with the householders’ requirements. The space provided by hotels, museums, department stores and theatres allowed her play with her sense of large scale and dramatic themes.

A key factor in Dorothy’s style was the curlicues and arabesques of the mouldings and plaster work which made her rooms look like the backdrops to the glamorous films we can still watch today. I wonder if Busby Berkeley (1895 to 1976) was inspired by her, I am quite sure he must have been

When Dorothy hired Lester Grundy she was introduced simultaneously to his passion for Baroque. Together they created “Modern Baroque”, a glorious, fun-loving style with swoops and swags of moulding, colour and large-scale pattern. Chinoiserie is mixed with classical Greek motifs and cabbage-rose chintz with Chippendale

This style was a perfect manifestation of Dorothy’s belief to make people happier through giving them bright and uplifting spaces.

The Hotel Carlyle, Madison Avenue, Manhattan, was built by Moses Ginsburg and was originally designed as an apartment hotel, or residential hotel. It was divided into apartments which were offered for sale at $1,000,000 per annum, 49 of which it retains today. The hotel opened in just after the Wall Street Crash in 1929 that began the Great Depression and needed style input to make it commercially desirable. By then divorced from George Draper, Dorothy was commissioned to design the lobby which she did in a bold style using geometric marble flooring, classical imagery and distinctive, modernistic light fittings which she designed herself. 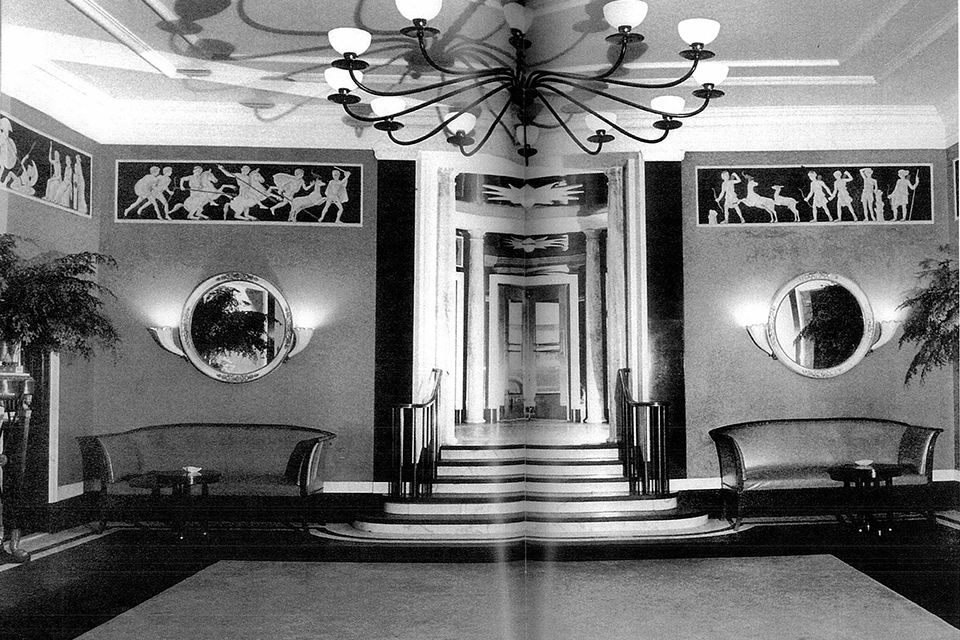 The lobby of the Hotel Carlyle, Madison Avenue at 76th Street, New York, 1930
Interior Design by Dorothy Draper
Photograph from “In the Pink: Dorothy Draper, America’s Most Fabulous Decorator” by Carleton Varney

The Hotel Carlyle project marked the breakthrough for her business from which she never looked back. Interestingly later she chose to live there.

Generally regarded as her “Pièce de Resistance” the Greenbrier Hotel in Virginia is indeed a true representation of Dorothy’s technique. The hotel needed a dramatic overhaul after it had been used as an army hospital in the second World War and in 1948 Dorothy was invited to renovate it. The resulting style has been called “Technicolour Colonial” by David Colman of The Wall Street Journal. The interior has remained intact, merely being touched up since by her firm Dorothy Draper & Co with Carleton Varney in charge of the work. 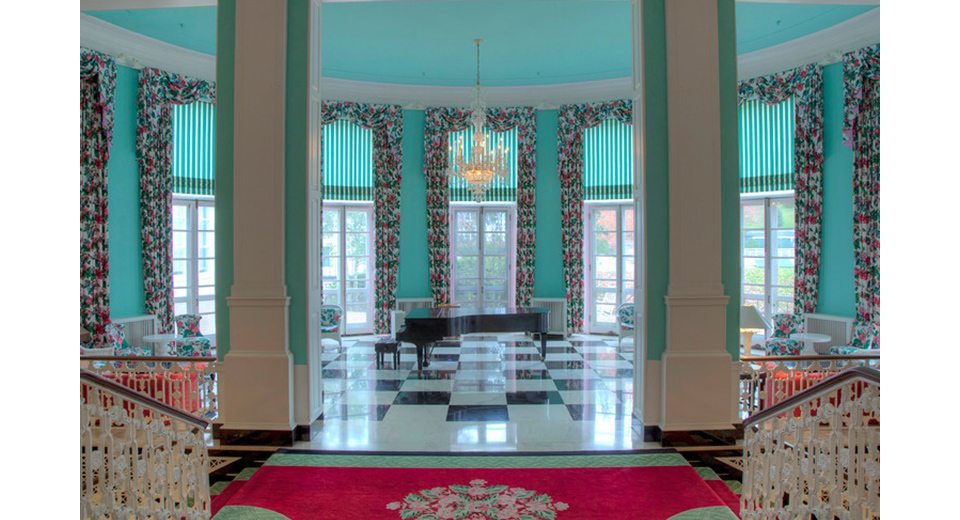 A foyer in the Greenbrier Hotel, this time in fuchsia and turquoise.
Designed by Dorothy Draper