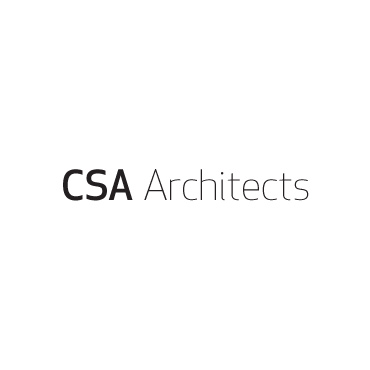 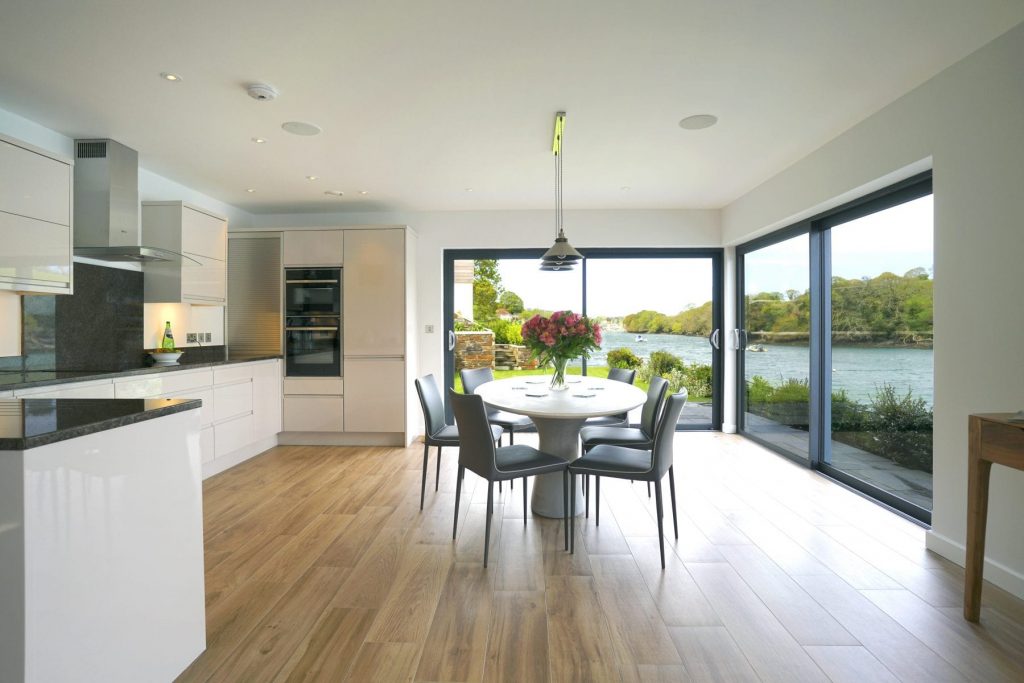 Waterside Home – Mylor Completed 2018 Our clients came to us with a small, dated, house on the creek-front at Mylor, and an idea for a replacement property that could be used for their holidays and as a rental. It was an interesting site, full of potential, with a water frontage, but complicated by a public right of way adjacent, and neighbouring properties with potential to overlook the house. We therefore took considerable time to model the views from all angles (inside and out), to ensure the residents’ privacy. Several of the windows are fitted with wooden louvres, precisely angled to allow in the light and make the most of the views, without allowing passers-by to see into the property. The interior is bright and airy, with an abundance of light from the windows and roof light, so there is no sense that there is a compromise made. The building itself is created with two off-set box structures, one aligned to the waterway, and the other to the road. With hung slate, and wood cladding respectively, these reflect the neighbouring properties’ shapes and finishes, along with the pitched roof and practical, un-fussy feel. This ‘contemporary vernacular’ uses the best of traditional materials paired with current construction techniques to achieve a high-performance, modern dwelling, that still sits comfortably in the rural Cornish landscape. The interior is similarly styled, with clean, crisp lines, and the simple detailing to create a welcoming home. 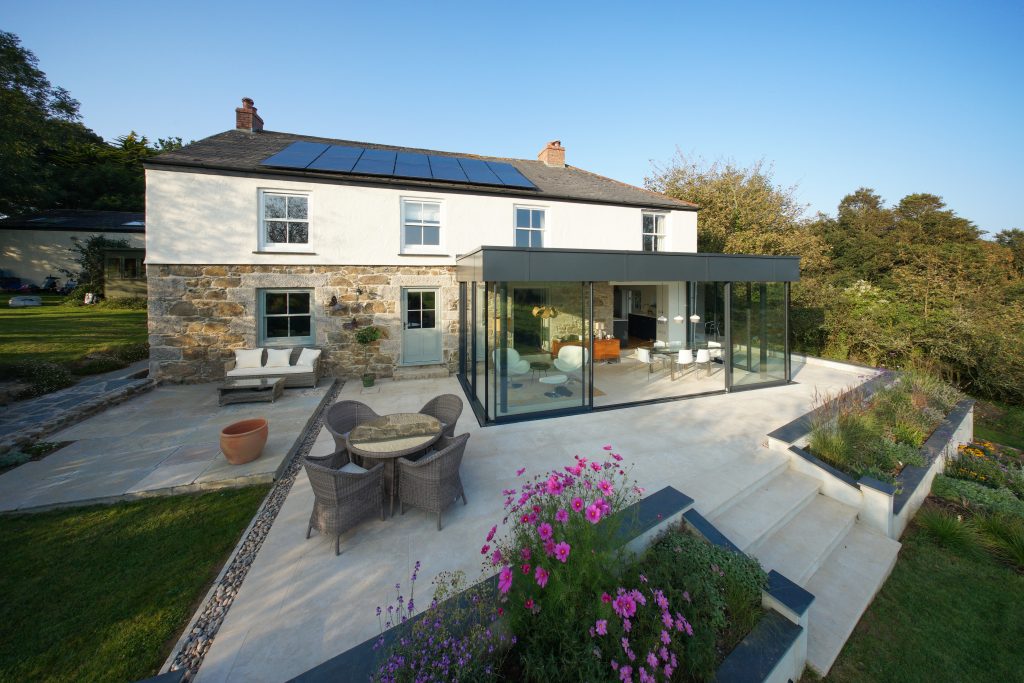 Contemporary Glass Extension – Lizard Pennisula Completed 2020 The owners of this traditional granite cottage on the Lizard Peninsula approached to explore ideas and provide alternative options for the plans they already had in place as they felt that something was missing. The proposals served to provide the additional space the cottage required however the disconnection between the internal and external spaces was an unresolved issue. Our solution was to rethink the construction of the extension and the external landscaping, to allow the levels to be re-engineered, and treating the extension and the landscaping as a single entity. We opted to introduce a level change down into the new garden room from the house, giving both extra height in the ceiling, and unobscured views out from within. This allowed us to create a level limestone plinth for the glass extension, which extends into the garden to create a seamless patio and wrap this around the cottage. Constructed in steel frame with high-specification structural glass, the floor to ceiling glazing creates the ultimate all-weather garden room. The limestone paving extends from the cottage walls, passing beneath the glass to the edge of the patio, and down into the garden itself, further emphasising the feeling of bringing the outside in. To complete the transformation of the cottage the pristine original stonework was revealed within the extension and out along the length of the ground floor allowing a feature to be made of it, and tying in perfectly with the new stone flooring. Where previously the house felt like it rose from the ground like a monolith, now it is much more at one with its surroundings, between the revealed stonework, the extensive terrace, and a secluded new dining area below the level of the house, merging the house into its beautiful rural surroundings 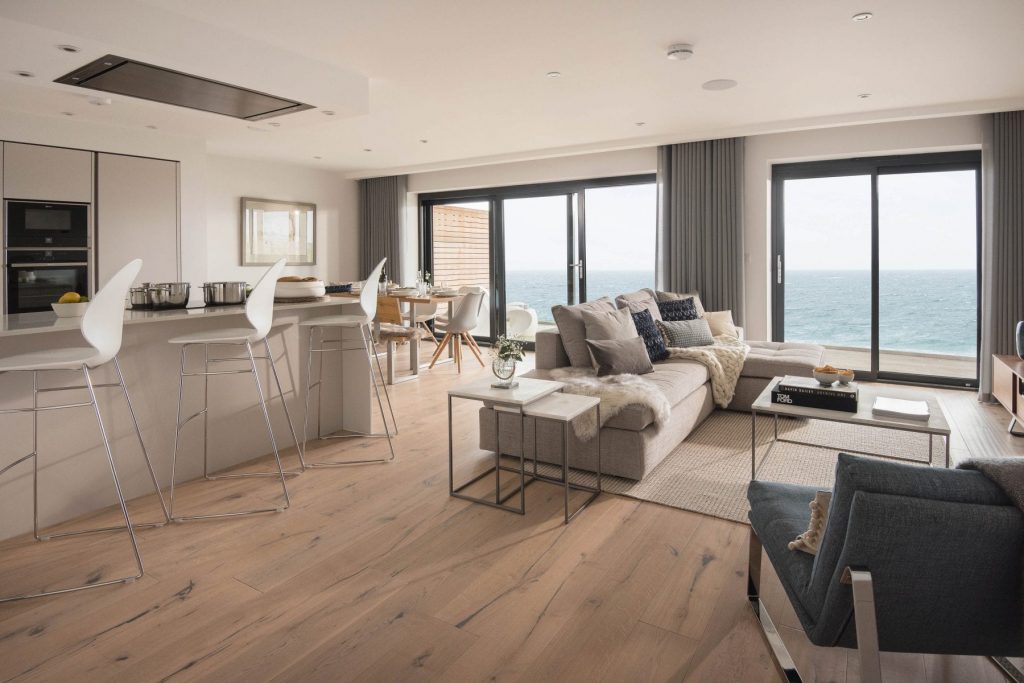 Contemporary Apartments – Pentire Completed 2017 CSA Architects were brought on board this project by developers Legacy Properties following the success of our previous development for them. Another architect had obtained planning permission for this site, for six apartments, but CSA were asked to revise this, produce a technical design, and improve the quality of the specification. Our new designs were passed by Planning on the first attempt. This project was beautifully simple to work on, as we already had great working relationships with the developer and the structural engineer, and were able to retain the specific members of this successful project team. The development contains six apartments – 1 one-bedroom, 3 two-bedroom and 2 three-bedroom – all with parking at the front, and a communal, landscaped garden to the rear. With a focus on a few key elements of detailing, materials and finishes, the level of luxury was raised, enabling the developers to market the apartments accordingly. An example of this was taking a mundane series of balconies from the original design and creating instead a glass and wood structure that appears to fold and bend its way up the rear of the entire property, creating balconies on every level, finishing with a brise soleil shading canopy for the top-most level. The final lifestyle feature that we included was a surfboard store, as the property overlooks Fistral Beach. 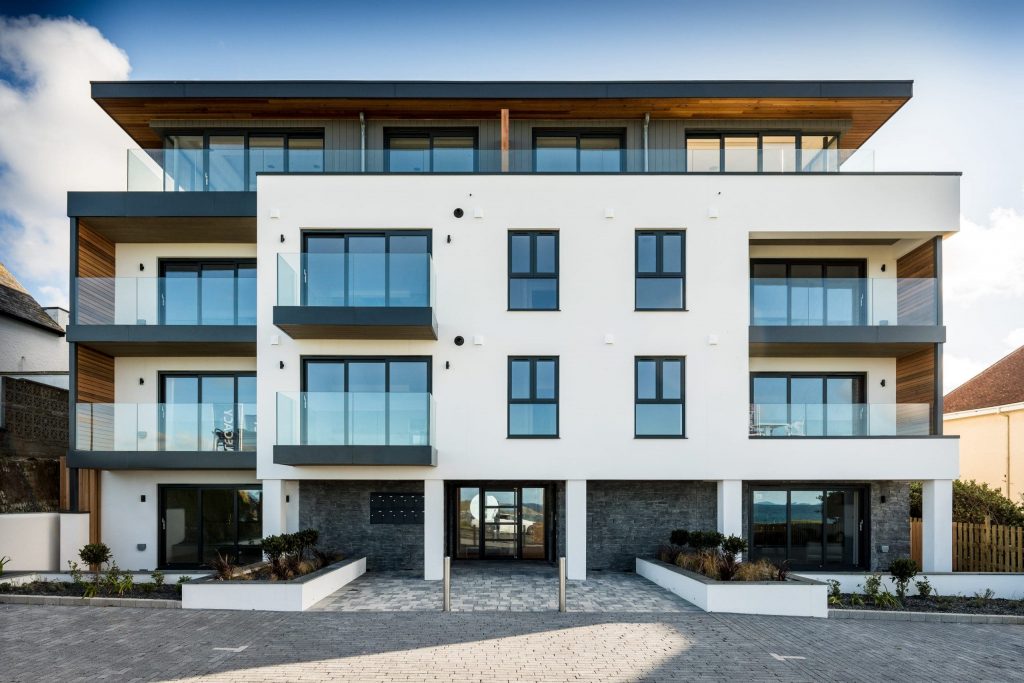 Residential Development – Newquay Completed 2017 CSA Architects were asked by Legacy Properties to design the redevelopment of a former care home site, into ten high end apartments overlooking the stunning Fistral Beach. Each property was required to have living-space overlooking the beach, and all have some form of outdoor space, whether a balcony or terrace, to take full advantage of the positioning. The project utilised the latest BIM software from concept to completion. This allowed close collaboration with Legacy Properties, and ensured that the proposals met their requirement for beautiful, modern properties which make the most of the spectacular views. The building features stone cladding to the ground floor, crisp white exterior to the second and third floors, and corner glazing on the luxurious penthouse apartments. They are equipped with the highest quality interiors and fittings, and little features which will make the difference, such as an exterior shower for rinsing wetsuits and surfboards. All these features combine to make a development that fits the developer’s ethos and style, and we worked closely with structural engineers and energy assessors to solve problems and ensure quality on the build, which achieved planning permission on the first attempt. As a consequence of the work we produced on Fistral House, Legacy Properties have contracted us to work on three further developments for them, demonstrating in the clearest terms their delight with this project. 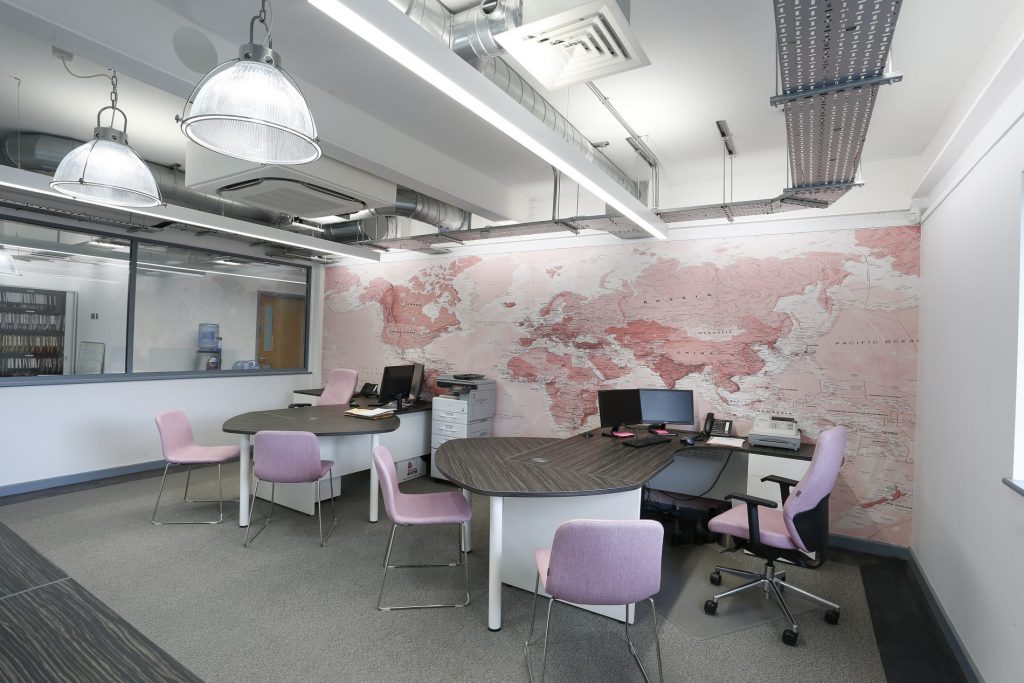 Flagship Storage Facility – Exeter Completed 2017 The new Britannia Lanes facility was deliberately designed to produce a landmark building on this prominent corner site, to improve brand visibility. Replacing an obscure site which no longer met operational needs, this facility is designed to increase Britannia Lanes’ reputation and accessibility. It gives a home to their operational office staff, expanding self-storage business, and a dramatically increased number of containers. Features include outward-facing parking spaces for the business’s fleet of branded removals vehicles, to advertise their availability and versatility, and the care they take to keep the vehicles in pristine condition – a successful part of the marketing strategy elsewhere. Staff access, and reception areas for the self-storage area and self-hire fleet are via a separate entrance to the HGVs, ensuring customer safety, and providing a lockable area for staff vehicles. The interior of the premises is designed to facilitate the growth and development of the business in years to come, with flexibility to change the layout if necessary. At present, just over half is devoted to container storage, stacked up to 5 high, with a covered entrance for access. The remainder has a series of drive-up units, an area for offices, reception areas to welcome customers, and 5 storeys of self-storage, which will be fitted out as required. Lifts and toilets currently extend to all floors, in anticipation of this. High insulation levels, and high-quality windows and doors protect the contents of the building, and external lighting is automatically controlled, for maximum efficiency. 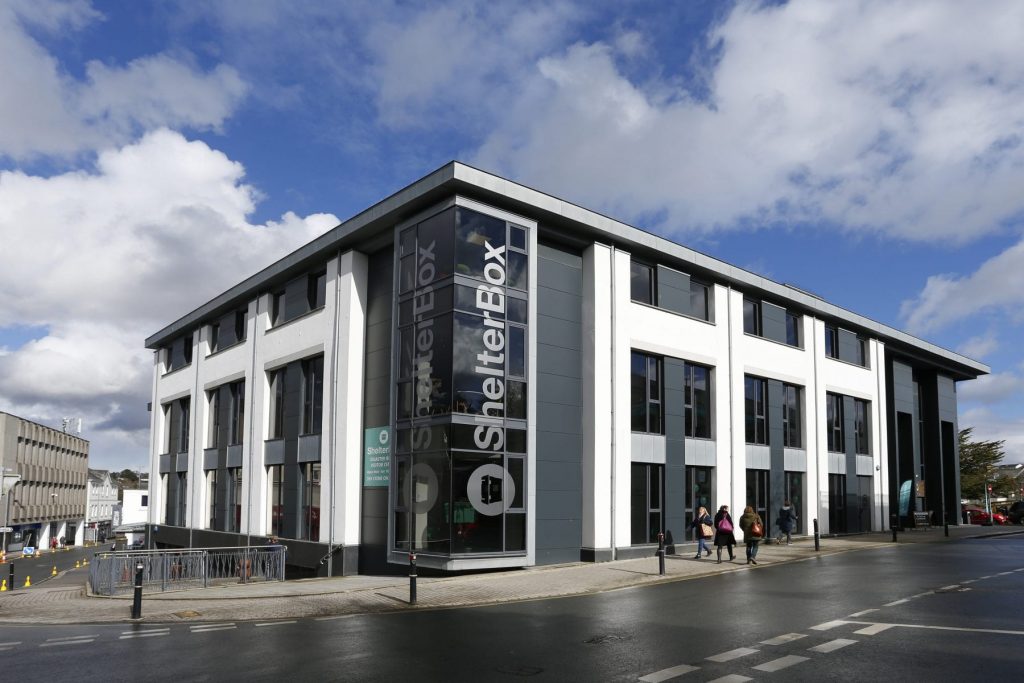 Office fit-out – Truro Completed 2017 CSA Architects was approached in 2016 to carry out the interior fit-out of the ShelterBox Headquarters building in the heart of Truro. Drawing together multiple teams from other locations into a single, purpose-built, three storey office space, the starting brief for CSA was a spreadsheet listing all the relevant ShelterBox staff, teams, and individuals’ hours, as well as where the cross-team linkages occurred. With this complex set of information, CSA started at the simplest level; creating spatial planning diagrams. This allowed the team leaders to review the relationships between the teams, which in turn fed into detailed office floor-plans, setting out furniture positions and individual work stations. This strategic approach led to a highly efficient layout, with space for 60 full-time members of staff, and between 10 and 30 part-time volunteers, operating on different work schedules. CSA was involved at every stage from the concept design, planning and detailed specification, which involved clever re-use of the existing office partitions on site. As ShelterBox is a charity, it was accepted from the start that some of the finer detailing produced might not be possible, at least initially. However, a coffee/laptop/hotdesking station and a writing wall for ideas might be possible in due course, and an office dog is an idea that would bring a new element of fun to the working environment. After a short bedding-in period, CSA revisited the offices, and conducted a review the office layout, re-positioning some of the teams to resolve initial teething problems around the noise levels.

CSA Architects is a design-led RIBA Chartered Practice based in Truro, Cornwall. We are a friendly, professional, practice of nine creative, motivated and experienced individuals, and we are driven by a passion for delivering high quality design.

Established in 1990 and with a longstanding reputation in Cornwall, we provide full architectural services on a range of projects including private homes, residential developments and commercial and leisure projects.

Our bespoke service is focused on our client’s aspirations and the specific requirements of the project to deliver exceptional buildings. We are proud of our extensive portfolio, which is testament to the strong relationships we have formed with our clients and the project teams we work with.