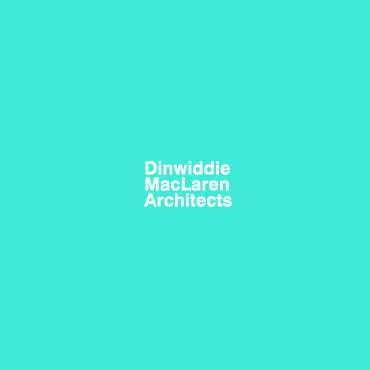 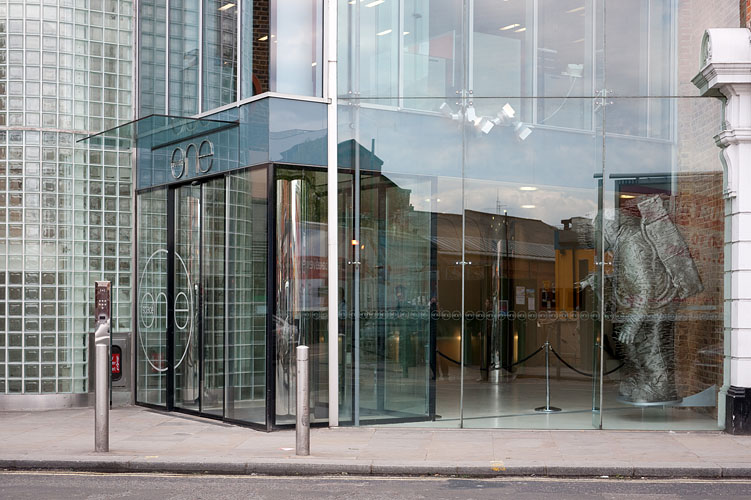 Beadon Road, Hammersmith, London W6 This project is located on a prominent site in Hammersmith on the east side of Lyric Square, and is a mixed-use development of retail and car parking with office space over. The project was designed in association with Robert Paterson and completed in two distinct phases: Phase I involved a complicated series of operations to create a new basement car park area below a group of Victorian buildings around the perimeter of the site. With the car park completed, the retail unit was built with two office floors over. The retail unit was leased out prior to Phase II commencing. Phase II involved the construction of the new curtain-wall and glass block clad six-storey office over. The offices were all fitted out to a Category A finish. The new entrance area incorporates a wire sculpture of a spaceman by David Mach, which automatically rises and falls within the three storey glass entrance space.

Broomwood Hall School, Clapham, London SW12 This project involved the extension and refurbishment of a Grade II Listed Building to provide a flexible performance and assembly space for an independent preparatory school. 74 Nightingale Lane was constructed as a private house in 1872 in the Italian gothic style. Subsequent alterations destroyed the original proportions, but the striking six-storey ‘campanile’ survived. The Practice was appointed to create a large theatre and assembly space by constructing a gridshell structured timber roof at second floor level, which is barely visible from street level. The new structure is exposed internally to provide a stunning column-free performance space. 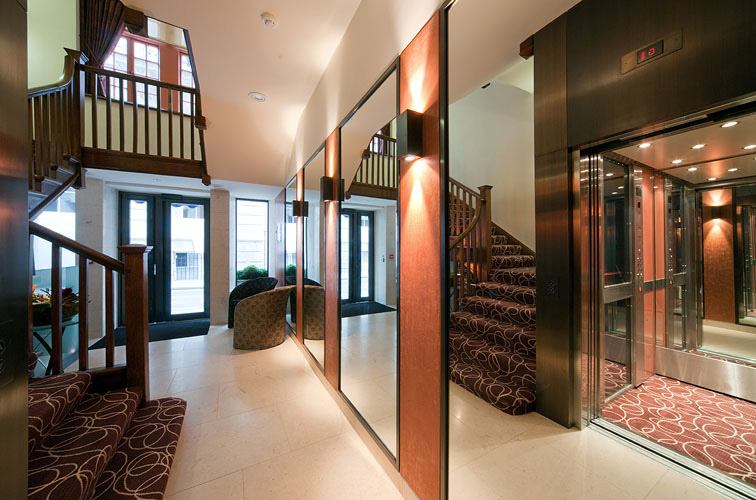 St James’s Street, Mayfair, London SW1 This Edwardian apartment building was designed in the French Renaissance style and built in 1909, and consists of 26 apartments. In 1935, Prunier opened their London restaurant on the ground floor, which is now Luciano Restaurant. The project comprised the refurbishment of the entrance and common parts together with the installation of a new passenger lift. The building remained occupied throughout. The project provided an opportunity to remove a legacy of unsatisfactory historical alterations, and restore the entrance lobby and common parts to create a consistently high-quality interior with a fresh modern feel. The new passenger lift was designed within a very restricted space. The shaft is enclosed in bronze with glass sides to recall the sense of movement of the original lift. 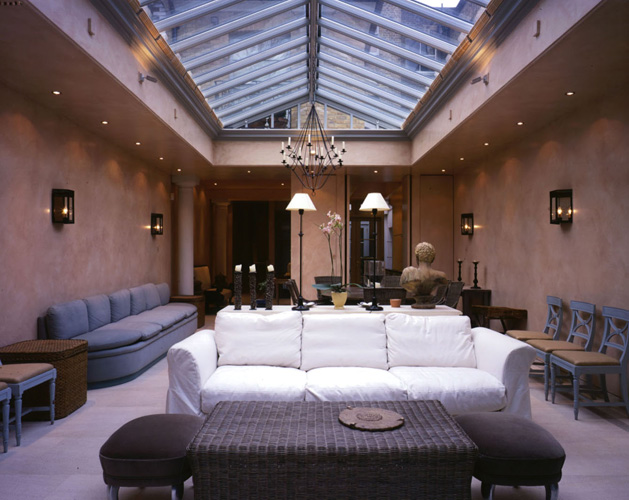 Edwardes Square, Kensington, London W8 Our Client purchased this property with the intention of creating three separate suites of rooms and a large conservatory/living space for entertaining. The property was completely refurbished with a large extension designed and built to the rear. A classical theme was adopted, respecting the original period of the house, but contrasted with contemporary designs for the kitchens, balustrading, artwork and furnishings. 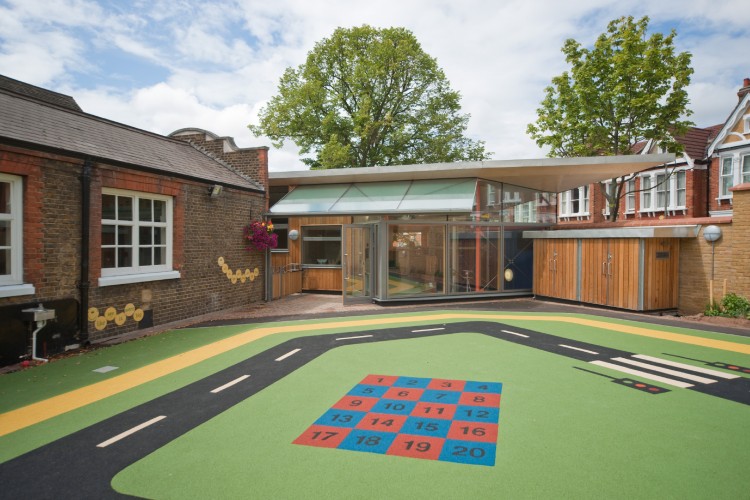 The Lime Tree Building, Hornsby House School, Balham, London SW12 The building occupies an awkwardly shaped corner site previously used for temporary accommodation. In order to minimise the bulk of the new building in this mainly residential area, the lower floor is constructed below the playground, thus ensuring that only the roof projects above the new boundary wall. The need to retain a Lime protected by a TPO and the close proximity of the existing Lower School building added to the complexity of both the design and the construction process. The design is conceived as a simple L-shaped building at ground floor level, with the stainless steel roof articulated above the brick boundary wall by a separating band of frameless glass. The L-shape creates an inner garden beside the Lime. The ground floor provides three classrooms and a small office. Below ground level, the building extends far out below the playground to provide a large dining and flexible performance space, together with a full commercial kitchen. 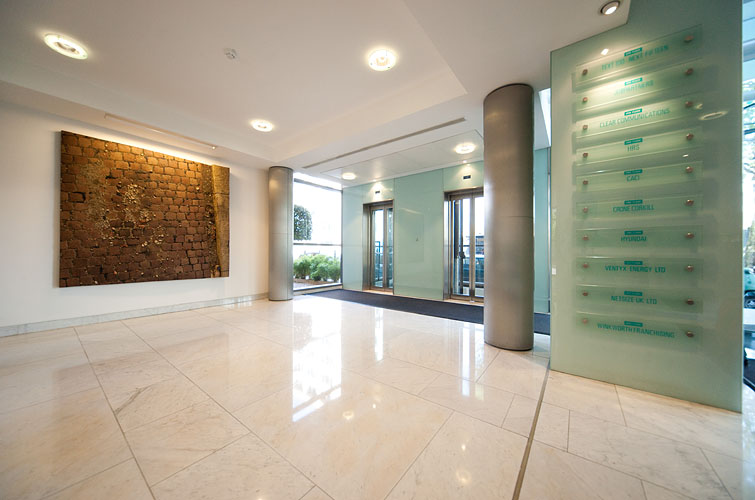 The Triangle, Hammersmith, London W6 These buildings, situated in a prime location in Hammersmith, were originally constructed in the late 1950s and are typical of this type, with minimal thermal performance and steel windows. Two of the group of three buildings were fully refurbished, with the works including an additional floor, new panoramic lifts, complete window and cladding replacement and a complete interior Category A fit-out of all seven floors; overall approximately 4,500sqm of space was created. Further works included the landscaping, car park and site enclosure design. The project was designed in association with Robert Paterson and completed in two phases with a possible further building (Britannia House) to be added at a later stage.

Dinwiddie MacLaren is a London based architectural practice with associated offices in Serbia and Bangladesh. The practice offers a comprehensive range of design services in the fields of architecture and interiors.

The practice provides a customer-oriented approach to building design, ensuring a personal and flexible service focussed on achieving our clients’ goals.

Established in London for 25 years, the practice can draw upon a wealth of experience across many sectors including offices, schools, health and leisure, industrial and residential work.

We have a forward-thinking open-minded approach to design, seeking to create buildings and interiors that are contemporary, imaginative, practical and efficient. Strong emphasis is given to research and analysis to ensure the highest standards of technical and design excellence.