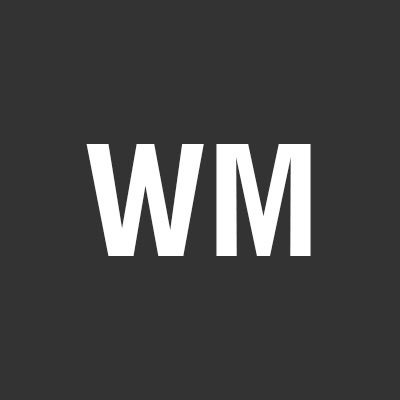 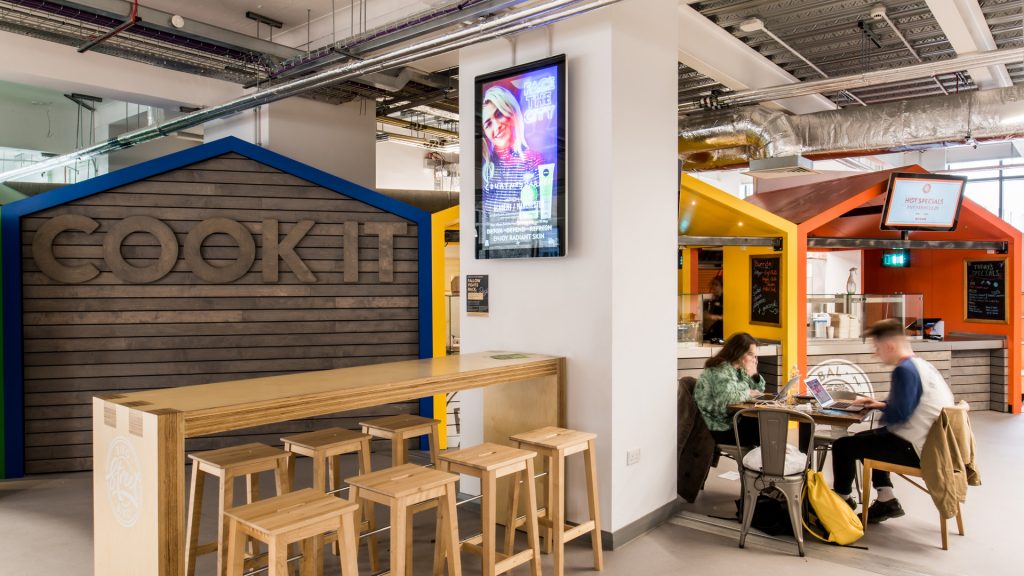 Manchester Academies This project involves the provision of additional floor space at the University’s Steve Biko Building, home of the University Students’ Union. The design seeks to build on the quality of the commercial areas of the building whilst enhancing and extending the facilities for the student facing areas, which are the essence of the Students’ Union. Strong infrastructure within flexible open plan spaces allows for simplified orientation whilst providing identity at each level. This approach facilitates the opportunity for the building to evolve and reflect the transitional nature of the students. The University of Manchester Students’ Union has committed funding to ensure the spaces in the extended building deliver the objectives set by the trustee board. This has been achieved through the provision of fast-casual food, coffee, grab and go retail, branded merchandise, and stationary outlets. Alongside the new retail spaces – and as one of Europe’s largest combined gig and venue spaces – the works look to modernise and extend its performance spaces with a new purpose-built theatre. 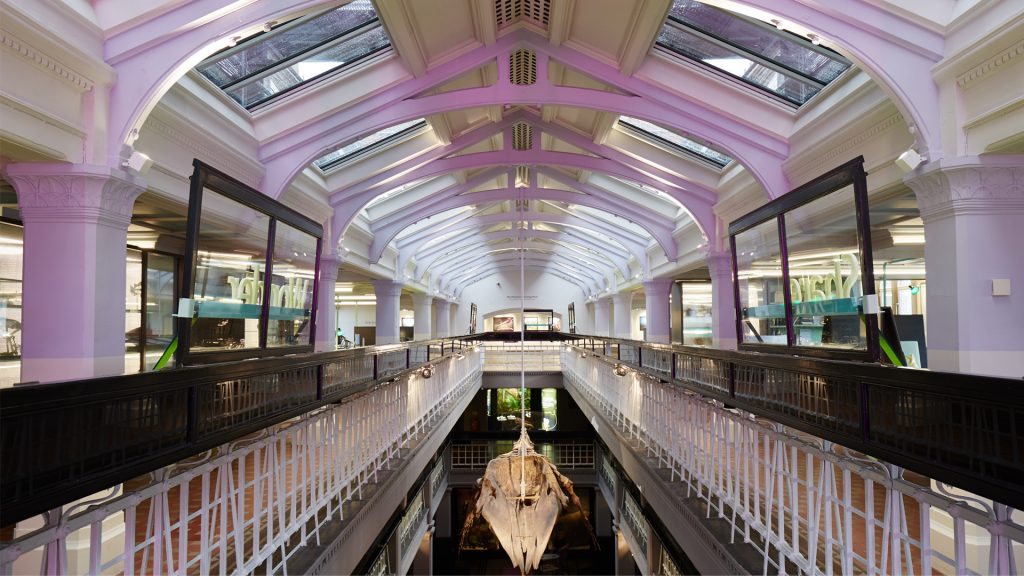 Manchester Museum The Study within Manchester Museum creates an innovative interaction space inviting the public to use the collections, tools, and resources to research their own interests or discover new ones entirely. The scheme was designed and delivered by Wilson Mason in collaboration with Ben Kelly Design, and re-imagines a forgotten space within the Grade II listed Alfred Waterhouse building. Taking advantage of the impressive existing structure, the transformation of the entire top floor created a ‘think space’ that incorporated design elements of the original features within a stunning new contemporary interior. “The Study is an extremely important project for Manchester Museum. It will be a wonderful and inspiring new space, which combines cutting edge research into contemporary science and human and natural history, with the widest possible access and opportunities for new thinking.” Dr Nick Merriman, Director of Manchester Museum. 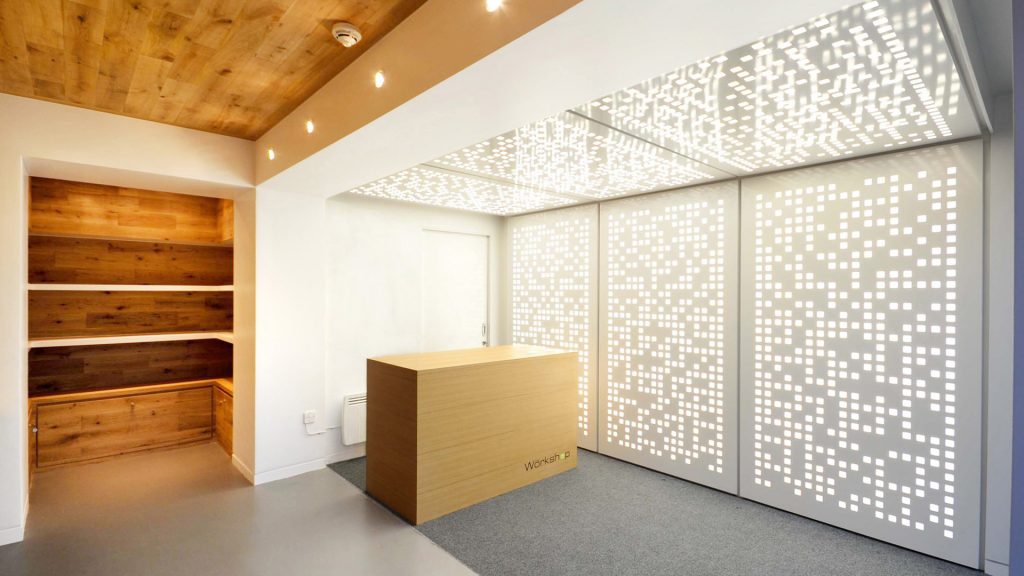 PC Workshop The creation of a workshop for a PC repair facility provided a retail frontage for a service that was originally contained within another business. The primary focus of the project was to provide a contemporary environment from which the PC workshop could operate. Accessibility was also a key consideration within the design, creating an inclusive and accessible facility for all campus inhabitants. The fit-out was centred around the creation of a lighting system that echoed the punched tape/ card programming systems of bygone computing. 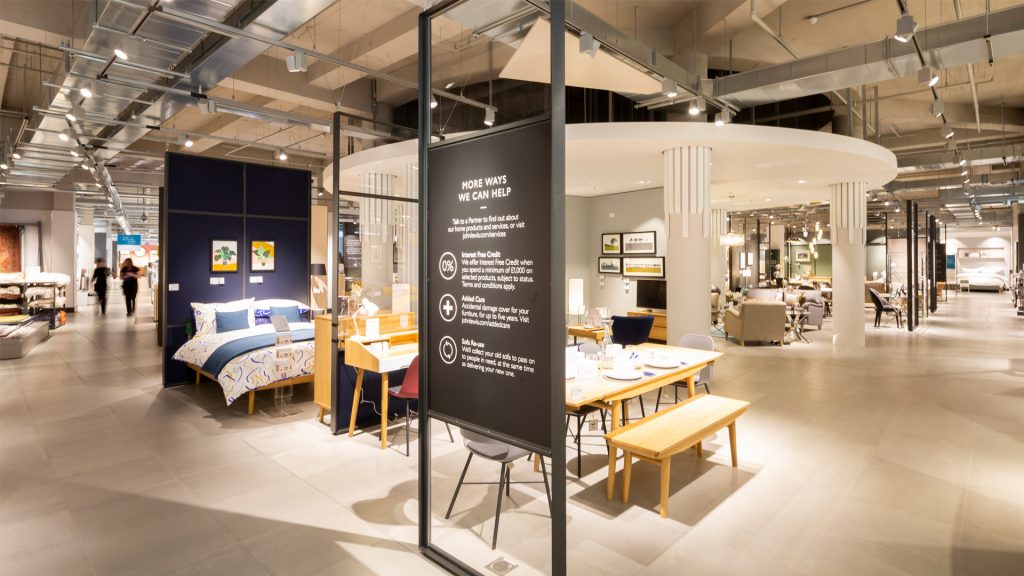 John Lewis Cheltenham This complex refurbishment and remodelling of John Lewis & Partners’ 51st store was successfully delivered to demanding timescales from concept design through to the much-anticipated opening. Extensively adapting the former Beechwood Shopping Centre, the expansive 150,000ft2 floor area was stripped back to the building’s framework to incorporate a new façade, and a complete refurbishment and fit out was carried out in line with the John Lewis branding. Detailed remodelling of the building’s upper floor public car parks was also integrated into the development. The use of BIM was fundamental to the success of this project, with Wilson Mason acting as BIM Manager on behalf of the client and developing the model with the contractors team through to completion. Cheltenham embraced the new store, and much of the immediate public vicinity was upgraded in parallel. 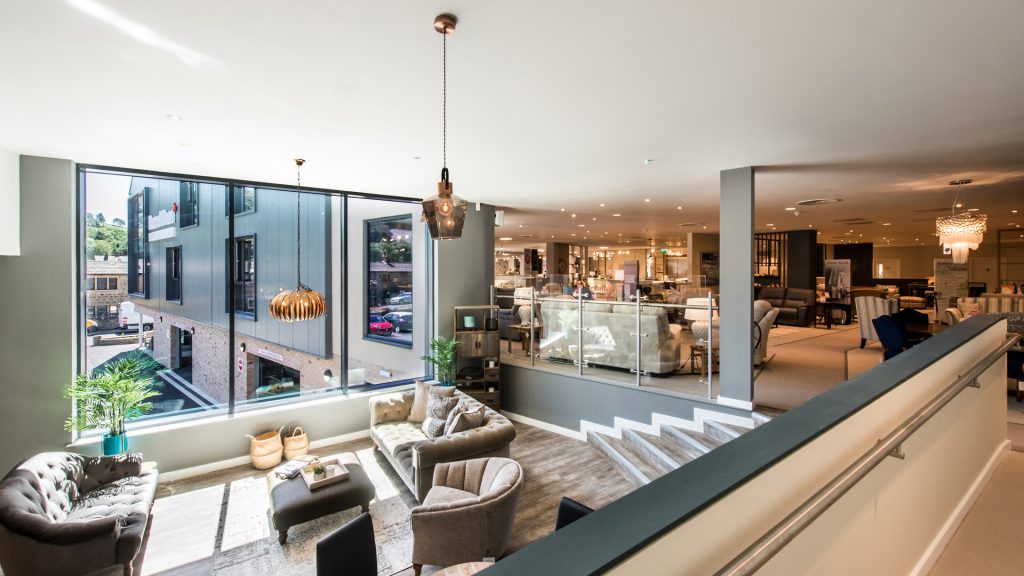 Russell Dean The site and existing store suffered significant flood damage during storm Desmond in 2015. This led the client to reconsider the viability of the site and commission a design to mitigate the impact of probable future flooding events. Due to the site lying within the flood plain between the river and the Rochdale Canal, appropriate flood resisting measures became an integral part of the proposals negotiated with the local authority. Discussion related to the acquisition of additional land was integral in allowing the scheme to provide the resistance required. The design developed lifted the functional floor above ground level and created retail space at first and second floor level. The ground level is occupied by car parking in order to support the retail activities. High levels of natural light and an integrated natural ventilation strategy provide a sustainable building solution on what was considered a previously undevelopable site. 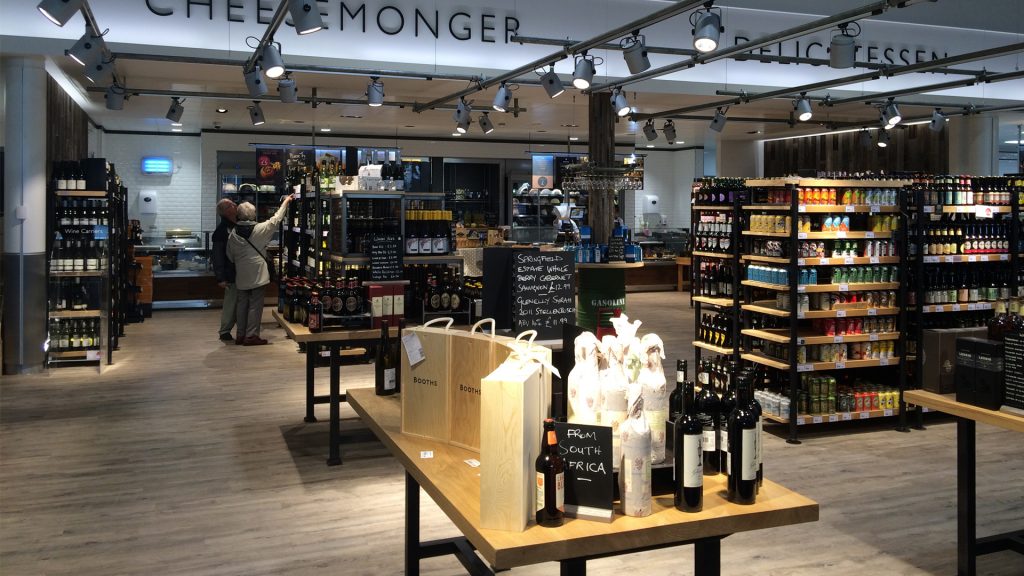 Burscough The project involved the fit-out of a pre-constructed shell for Booths Supermarket. Using the 3D steel fabricators IFC model and 2D CAD drawings, the existing shell was modelled in Revit. Through the use of these programmes, the team was able to accurately model the fit-out with a clear understanding of the existing structure and the junctions between old and new, hence minimising the time on site and limiting the number of unknowns in the delivery of the project. Families within the model were created to represent the standard fixtures and fittings used by the client based on supplier’s information and these families have been stored for use in future schemes. The Revit model was made accessible by the design team through the use of online storage and cloud technology, with the data provided allowing coordination between the structural, mechanical, and electrical elements of the design. The model has been exported into various 3D imaging packages for use in presentations and it has also been used to undertake sun path analysis due to the design of the existing heavily glazed façade. 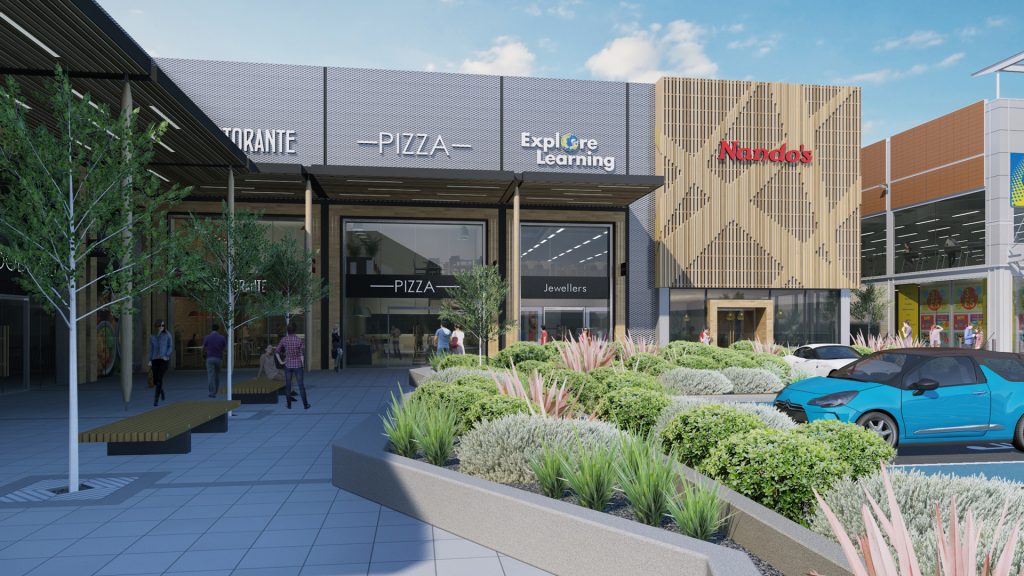 Retail Park Re-Brand Wilson Mason produced a design for the Crown Point Retail Park re-brand. The idea was to create an aspirational outlook for both the centre and visitors, lifting the profile of the existing buildings and consequently stimulating redevelopment in this corner of the development and the wider Crown Point retail park. The canopy soffits and structural supports were formed from timber which maintained continuity with the existing park canopy soffits. The organic materials, detailing, and form of the proposal incorporated non-vertical elements and a range of timber species to provide diversity and visual interest across the development. The stores to either side of the corner store incorporated covered colonnade spaces which encourage visitors to dwell and be drawn in to the stores. The colonnade produced a presence to this corner of Crown Point, creating a distinctive, simple, and elegant identity. The removal of the existing low-level canopy and the introduction of mezzanine level glazing visually connected the mezzanine level with the park and maximised daylight penetration from the east facing glazing. The enhanced visibility in to the stores also provided the opportunity for increased display and branding.

At Wilson Mason, we believe architecture has the power to change the world. Design goes beyond meeting people’s needs; it changes how we think and feel. Combining technical innovation with design excellence, we uncover inspirational, cost effective buildings that enhance the lives of those who experience them.

Our rare expertise has been shaped by our well-established relationship with science and research. We hold a wealth of intelligence and experience that we apply to a range of specialist sectors including science, education, healthcare, workplace, manufacturing, and retail. By manipulating space, colour, material, sound and light we produce spaces that seamlessly blend architectural logic with architectural poetry. Our designs amplify the sensory experience, scripting the interaction between people and space.